How to Play Slide Guitar for Beginners How to Play Slide Guitar for Beginners

One of the most distinctive sounds in blues and rock guitar is that of slide guitar.

What is slide guitar, you ask? “Slide” is generally distinguished as the use of an object, such as a small glass bottle or a metal tube, that is worn on one of the fret-hand fingers and is positioned along the length of the string in order to produce different notes. 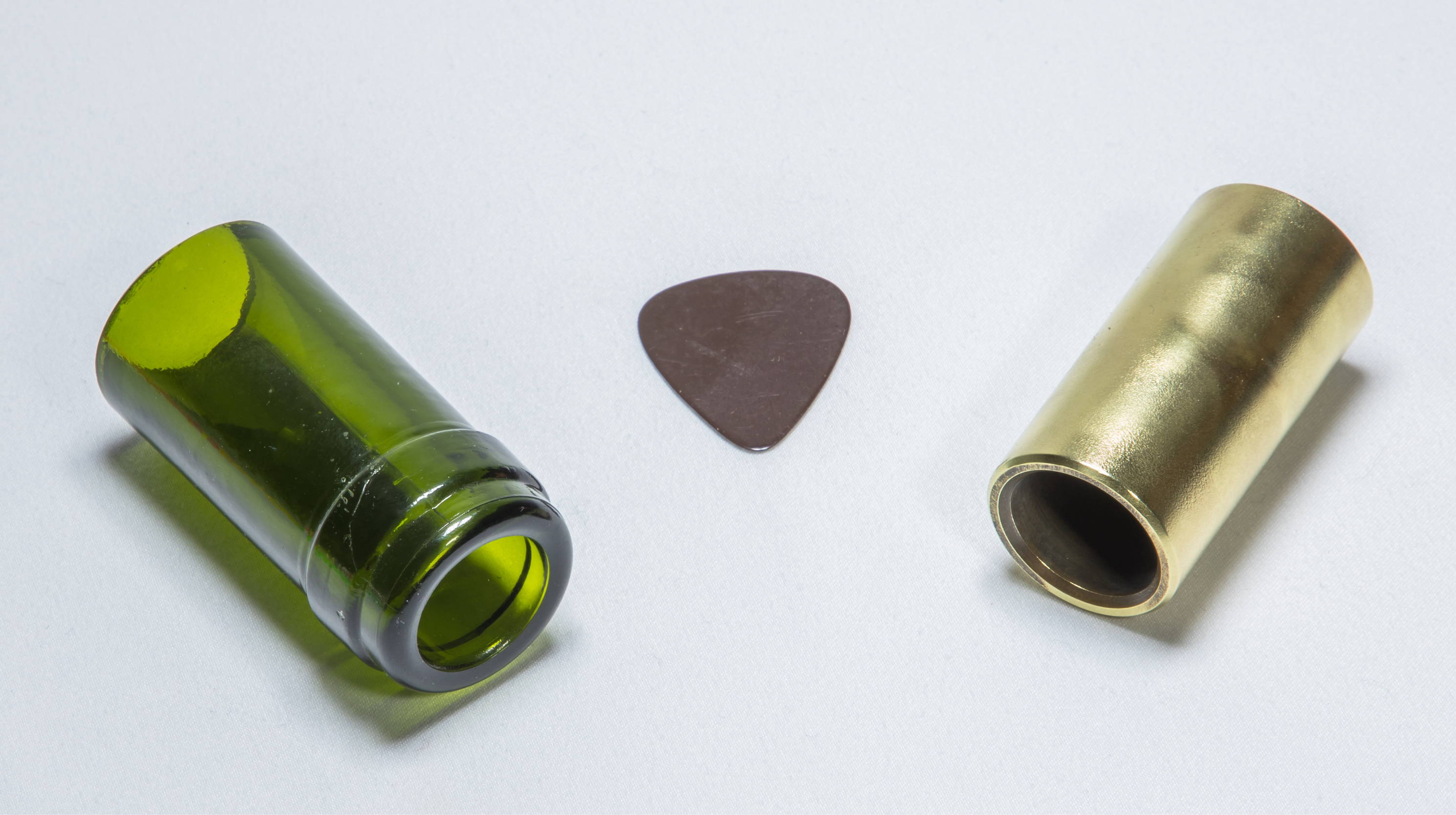 Without having to “fret” notes in a conventional manner, slide guitar offers players the ability to move seamlessly between notes, using glissandos (gliding from one pitch to another, also known as a portamento) to create melodies. The slide also can provide a wide variety of vibrato sounds of varying width and speed.

In this way, using a slide enables guitarists to emulate the sound of a human voice when playing single-note melodic phrases. There are also a variety of slide guitar tunings that are often utilized to accommodate specific musical sounds and phrases.

This primer for slide guitar beginners will get you well on your way to developing proper and effective slide guitar technique.

The technique of using a hard object against a plucked string can be traced back to a one-stringed African instrument known as a “diddley bow.” Blues guitar legend Buddy Guy has spoken about, as a child, unwinding a wire from a whiskbroom, nailing one end of the wire to the porch and the other up higher to the side of the house, creating a taut metal string. Plucking the sting would create a specific pitch. He would then use a piece of bone or other smooth object to slide up and down the “string” while striking it in order to create melodies.

Slide guitar is also often referred to as “bottleneck” guitar, because many of the old blues players in the Mississippi Delta would cut the necks off bottles and wear them on a fret-hand finger to play slide.

In Hawaii, guitarists often tune to an open tuning for slide guitar, wherein strumming across the unfretted “open” strings produces the sound of a specific chord. Because tuning the guitar to an open tuning often requires loosening some of the strings, this technique came to be known as “slack key” guitar. Many would use a steel bar against the strings to sound notes, thus inspiring the term “steel guitar” in describing this technique. 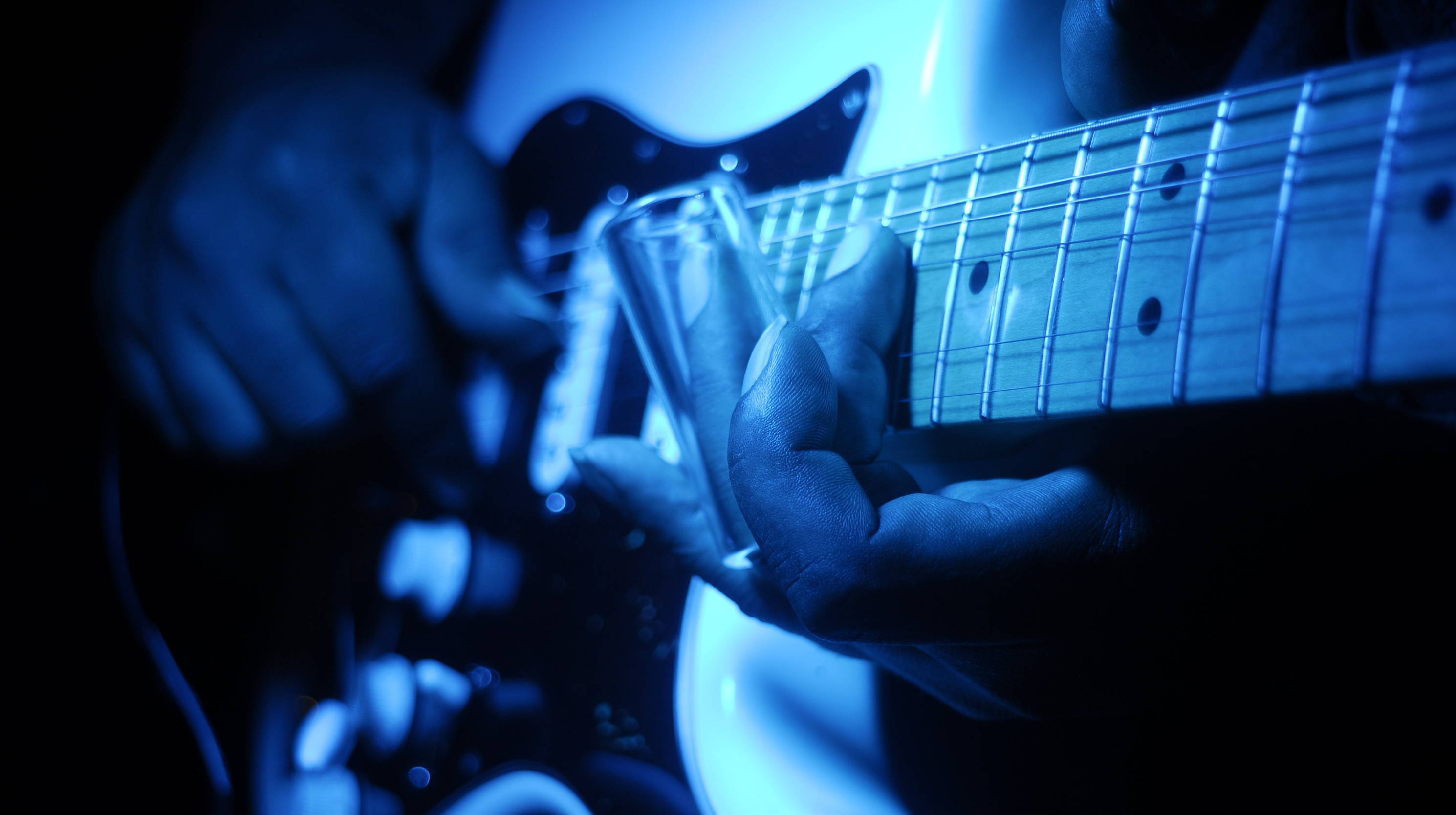 What Are the Best Slide Guitar Materials?

Other great slide guitarists like Ronnie Wood and Joe Perry prefer to use ceramic slides. Each material will produce a different tone, so it is recommended that beginner slide guitar players try the different materials to see which is preferred. 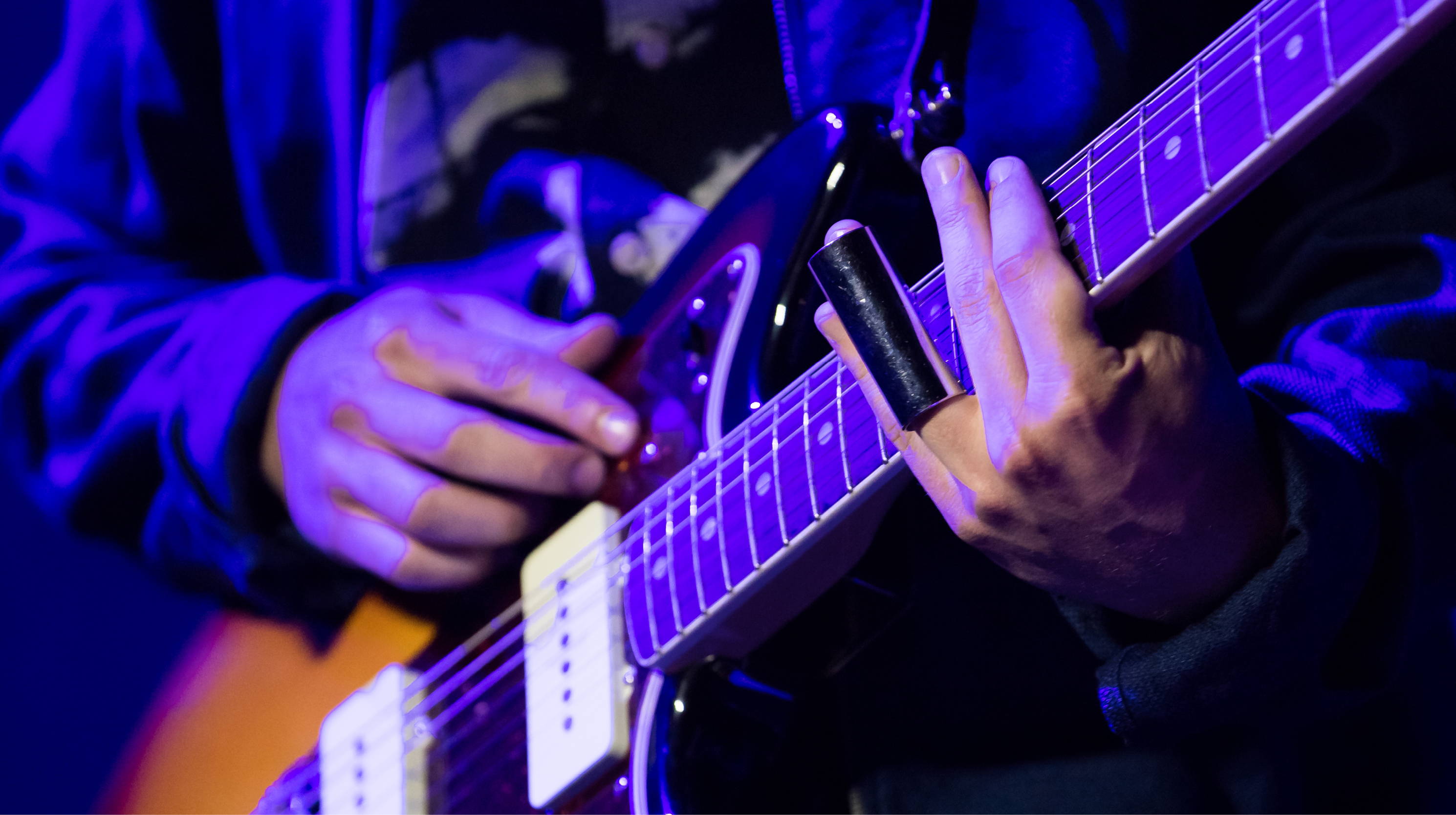 Slide guitarists use both open tunings and standard tunings.

The most common open tunings for slide are open E, D, G and A.

Strumming across all of the open strings yields an E major chord; barring across all of the strings at a given fret will yield a major chord with the root notes found on the sixth, fourth and first strings. A twist on this tuning is to lower each string one whole step (low to high: D A D F# A D) which results in an open D tuning.

Also prevalent are open A and open G tunings: to tune to open A, raise the D, G and B strings up one whole step to E, A and C#, respectively, while tuning the E strings and the A string normally (low to high: E A E A C# E). Open G is achieved by lowering all of the pitches a whole step (low to high: D G D G B D).

While we're on the topic, if you're on the market for a guitar tuner, we've got you covered!

For proper intonation, the slide should be placed directly above the fret-wire, applying just enough pressure allows each note to ring clearly.

For beginning slide guitar players, it is beneficial to keep the fret-hand fingers relatively straight. Many slide players secure the slide by using a fret-hand finger on either to hold it in place; some players, such as Duane Allman, preferred to allow the slide to “float” by itself, without being touched by either the middle finger or the pinkie. 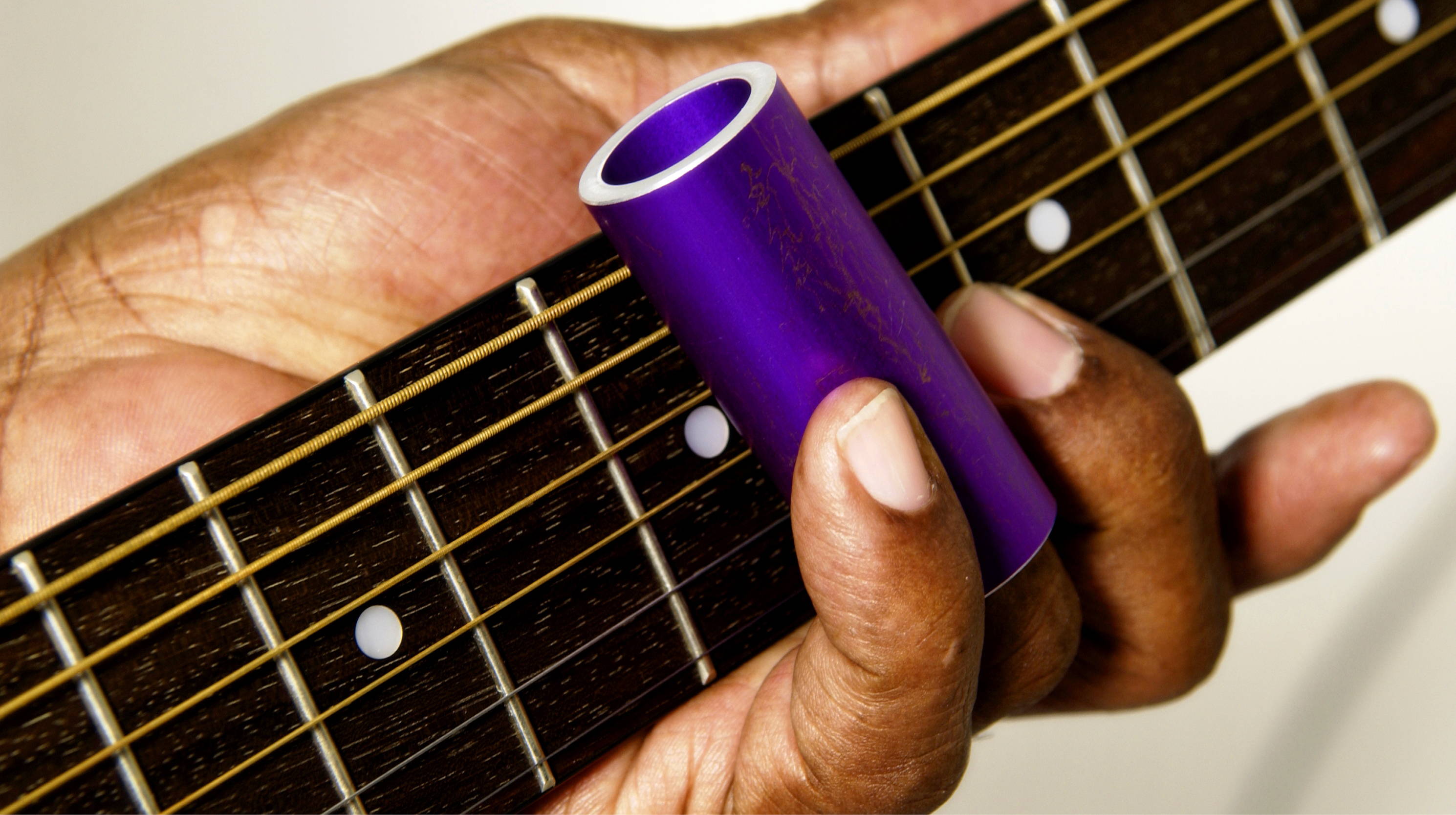 Johnny Winter once stated that you need to have a distorted guitar tone to play slide effectively. This notion was driven by the inspiration of emulating the harmonica phrases and sounds of legendary Chicago blues harp players like Little Walter Jacobs, Big Walter Horton and James Cotton. But Johnny went on to say that, once one develops better slide technique, cleaner tones can be just as effective, opening up the palette and range of the slide guitar sound. The Spark guitar amp offers a wide variety of tones that pair well with slide guitar, such as the Blues and Crunch settings, as well as a great range of clean tones to help you learn to play slide guitar as well. 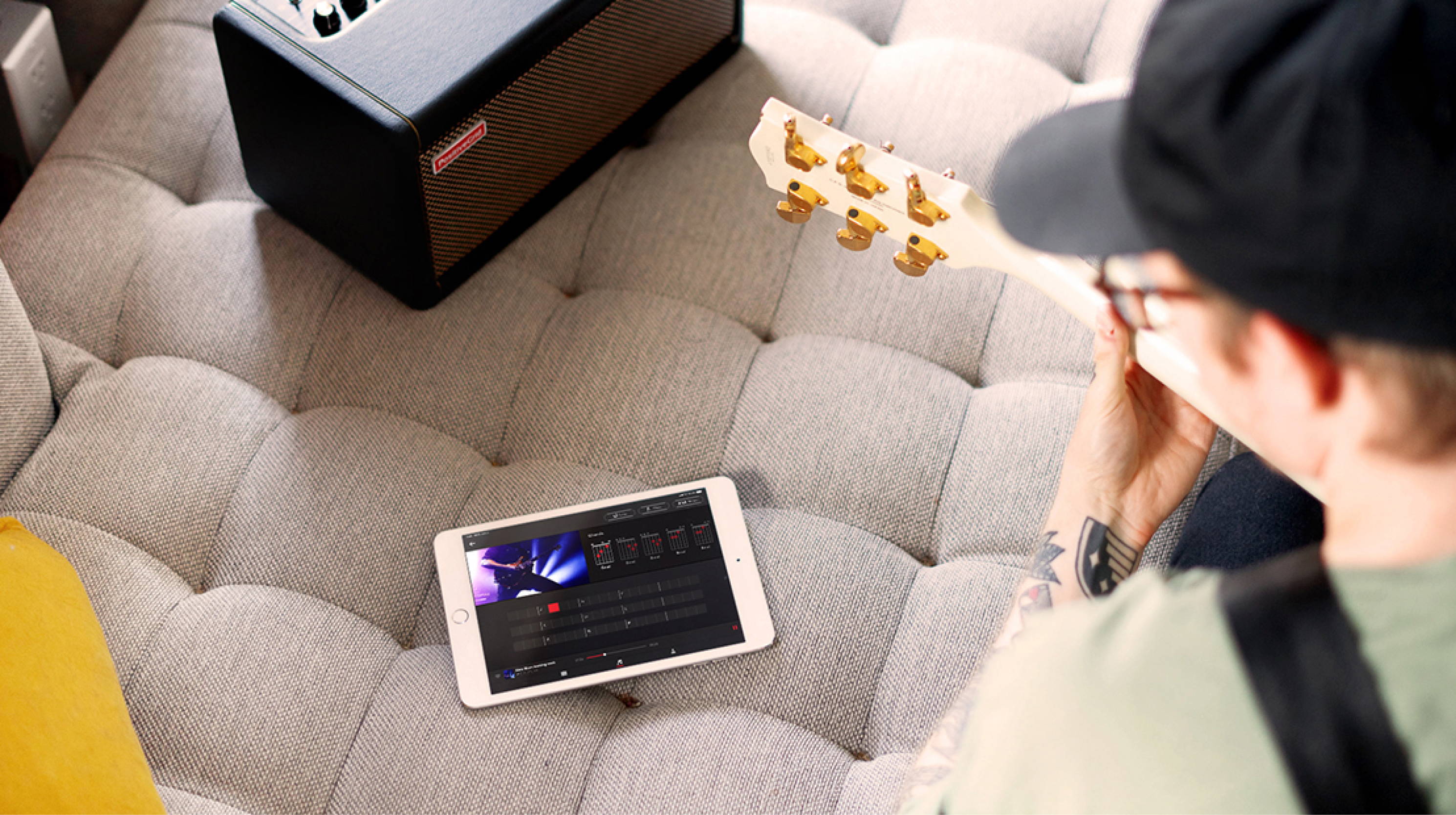 Final Thoughts: How to Play Slide Guitar for Beginners

Harnessing proper slide guitar technique will take dedicated work and time to develop. The challenge to achieve effective intonation combined with free-flowing musical expressiveness is something all slide guitar players spend a lifetime working on.

If you’re looking for the perfect companion to guide you on your journey to slide guitar mastery, look no further than Spark by Positive Grid. A powerhouse 40 Watt combo, Spark is a smart amp and app that jams along with you using Intelligent Technology, with backing tracks available for any style you play. Featuring over 10,000 tones on the Positive Grid ToneCloud, including sounds by many of the guitarists mentioned above, you’ll never run out of inspiration. Plus, you can use Spark as your USB audio interface for easy home recording and track your ideas with the included PreSonus Studio One Prime recording software. Find out more here.